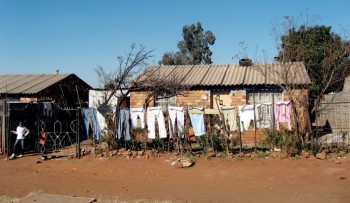 The Orange Farm community is a semi-rural, undeveloped area 40km South of Johannesburg. The township is one of the largest informal settlements in South Africa, with most estimates giving a population of 1 million people.

The challenges that are faced by this community are high levels of poverty; low levels of literacy; lack of basic services; lack of access to justice and health care facilities; lack of consultation between the local government and community members; high levels of violence (generally alcohol-related); lack of employment which leads to increased crime.

The Orange Farm Human Rights Advice Centre was established (by the Catholic Church) in 1996 to alleviate the suffering of the community members through sustainable grassroots initiatives aimed at local empowerment, to improve access to health services and justice and educational opportunities in order to fulfill basic human rights. They also aim/ed to make the community aware of their rights enshrined in the Constitution and to go further and engage (and influence) public policy processes which would lead to accountability at local government level. After its closure in 2004, the community continued (and still continues) to visit the premises seeking its services. This is why stakeholders in the community met to look at possibilities of resurrecting the centre and why the centre is still in operation despite the many obstacles it faces such as funding, land ownership, proper facilities and poor service delivery.

The advice office is part of an umbrella body called the Orange Farm Water Crisis Committee. This committee was formed in response to poor basic service delivery issues such as water and sanitation in Orange Farm. The Advice office has developed partnerships with the Department of Labour.